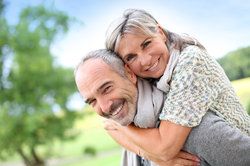 Most people probably wouldn’t be surprised to hear that gum disease is a common cause of dental problems, but its risks are not just limited to the mouth. Gum disease has thus far been linked to multiple other diseases and complications, many of which pose a serious danger to your overall health. In the interest of keeping your teeth and body as healthy as possible, our Reston cosmetic dentistry office would like to extend the following information on the risks of gum disease. Hopefully, you can take the right precautions or, if needed, seek the right treatment to protect yourself from its potential effects.

What Is Gum Disease?

Gum disease, or periodontal disease, is an inflammation of the gums. Similar to how tooth decay is a bacterial infection, gum tissue can also suffer from the spread of bacteria and plaque. In its earlier stages, this inflammation is known as gingivitis. Although most cases of gingivitis are relatively mild, untreated disease can spread beneath the gums and into the roots of teeth. If the infection spreads to bone tissue in the jaw, the disease progresses into a more serious form known as periodontitis. While all periodontal problems are cause for concern, the longer they are allowed to cultivate and spread, the greater risk a person has of developing dental and health complications.

Any degree of gum disease can increase one’s chances of developing tooth decay. But as gingivitis and periodontitis progress, patients may experience a host of additional problems. At first, gums will become reddened and sensitive. When brushing or flossing, they may be prone to light bleeding. Gums will also slowly lose tissue, resulting in a receding gum line over time.

As gingivitis advances, gums will loosen and pull away from teeth. Pockets of infection will thus develop in the space, with the depth of pockets being a good indication of the severity of disease. At this point, patients must seek treatment if they do not wish their teeth or bone tissue to be infected.

If periodontitis ensues, teeth may shift position or become loose due to inflamed bone tissue. Their roots may also begin to decay, resulting in the need for root canal treatment. Ultimately, if treatment is not sought, tooth loss will occur.

Patients with a history of gum disease are at an increased risk of multiple other diseases. While the reasons for this correlation are not entirely known, it is generally accepted that gum disease can have negative long-term effects on overall health.

Taking these health risks into consideration, it’s clear why treating gum disease is a priority at our dental practice. If you suspect that your gums are currently suffering from gingivitis or periodontitis, allow us to recommend the appropriate periodontal treatment.

Healthy gums equate to a healthy body. Be proactive in your hygiene, both at home and at your dentist. Schedule a cleaning or periodontal treatment to avoid potential complications in the future.

We’ve Got the Answers

Request an Appointment
Scroll to Top